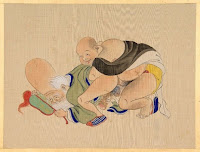 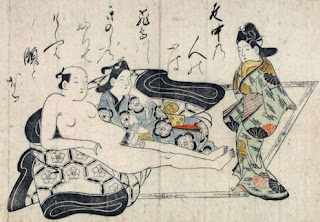 Not all Japanese art is cherry blossoms, surging waves, and exotic birds, there is a whole world of shunga or erotica filed away among Japan’s beautiful canvases, silks, and scrolls kept by museums and in private collections.
Shunga’s popularity really started during the Edo Period 1603-1868 when the country was under the rule of the Tokugawa shogunate. This rise in popularity stemmed largely from the dominant male population which had massively increased as a result of the high number of samurai/retainers required to guard provincial lords and their estates and maintain law and order, and through the surge in agricultural laborers required to produce the food to feed this large population. To get an idea of what we’re talking about, the city of Edo—the former name for Tokyo—had a population of one million by 1721. This made Edo the largest city on the planet. But what’s more staggering is that seventy percent (70%) of the city’s population were male. This meant a lot of horny blokes looking for good wank material.
*مسعود شریفیان البرزی*
خانه
ایمیل
RSS